NEWS on Sunday that Rick Kelly would join IndyCar Champion Scott Dixon and Aston Martin star Jake Dennis in a Castrol and BP-backed R-Motorsport Aston Martin Vantage GT3 made for one of the bigger announcements in the race’s history.

As a rising star in GT racing, Dennis brings Aston Martin factory status to the squad as well as a seasons worth of experience in the DTM.

Dixon and Kelly, meanwhile, both have glittering careers that position them at the top of their respective disciplines.

In more than 530 Supercars race starts, Kelly is a two-time winner of the Supercheap Auto Bathurst 1000, the 2006 series champion and continues to remain a contender 18 years after his series debut as a Holden Young Lion.

Dixon, meanwhile, is one of the most successful drivers in IndyCar history. His 46 career victories place him behind only AJ Foyt and Mario Andretti on the series’ all-time winners list, while his five titles trail only Foyt in that storied list. The 2008 Indianapolis 500 winner, Dixon is also a former outright (2006) and two-time class (2015 & 2018) winner in the Daytona 24 Hour IMSA classic as well.

Between them, the trio are one of the most broadly credentialed to tackle the race.

It is not, however, the first time that such an all-star combination has been put together for Australia’s International Enduro – in fact, the GT history of the race is replete with combinations that made people go ‘woah’ when announced.

From a collection of talented internationals, to Australia’s best Supercars drivers joining forces in the same car or a with group of drivers from all walks of life – the race has had some sensational driver pairings in the past.

AUDI were the first brand to fully embrace the brave-new GT3 era of the 12-Hour in 2011 and brought with them two cars; one with internationals and one filled with local drivers.

They didn’t skimp on either combo, either; the Darryl O’Young / Chris Mies / Marc Basseng international car was always the favorite given their vehicle knowledge though perhaps they didn’t expect the Mark Eddy – himself an Australian GT champion – Warren Luff and Craig Lowndes ‘Aussie’ car to put up such a fight. Audi investing in great talent early-on gave the GT3 era legitimacy from the start and set the wheels in motion for great combinations in the future.

FOLLOWING Audi’s lead from the year before, Erebus Motorsport’s first crack at the 12-Hour came with support from AMG and the addition of Jeroen Bleekemolen to the squad – the Dutchman well credentialed from a lengthy and successful GT career already.

The addition of GT champion Peter Hackett and a (at the time) rising Supercars star in the form of Tim Slade, made this a strong all-round combination. Honorable mention to Audi as well – the winning combination was again very special – and Clearwater Racing, who introduced Australia to the incredible Matt Griffin alongside Craig Baird in their Ferrari.

WHILE Thomas Jager was highlight rated as an AMG Professional and Alex Roloff qualified as a ‘sneaky’ Silver-ranked (amateur) driver, Bernd Schneider’s participation in the 12-hour was the big-ticket item here.

While plenty of gun internationals had contested the race before, the five-time DTM Champion was the first overseas driver that could qualify as a ‘legend’ to commit to the race, to the point where people traveled to Bathurst specifically to see the German hero. As well as delivering plenty of media coverage and attention, it also delivered Mercedes-AMG and Erebus Motorsport their first 12-Hour victory in the process. 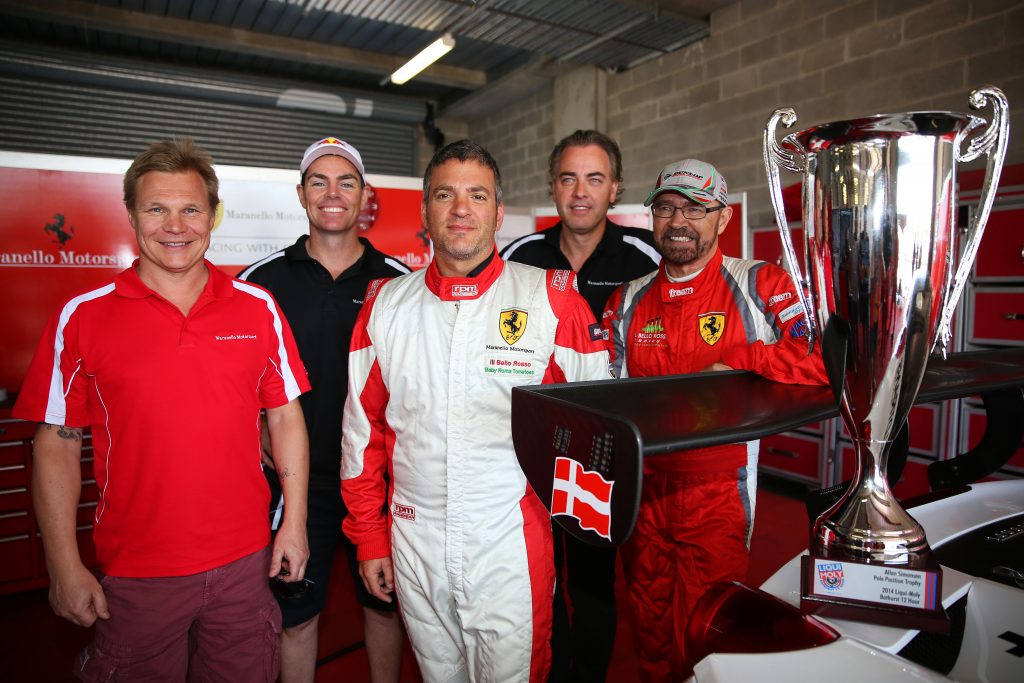 BACK IN the day before ‘all-professional’ combinations were allowed, the best chance for teams to win the 12-Hour was to pair their ‘Am’ driver with three professionals – and Maranello did it better than anyone when they assembled their 2014 line-up that would ultimately deliver Ferrari’s first Bathurst triumph.

Bowe and Lowndes were known properties, of course, but Salo added x-factor, a strong F1 resume’ and a serious cool-factor to the squad, too. Edwards held up his end of the deal superbly and Lowndes’ final stint against the AMG was typical of that man at that Mountain.

IT IS hard to pick just one combination from the remarkable 2015 12-hour field which arguably defined the race’s ability to stand on its own moving forward.

With the big-names from Supercars committed elsewhere, the ’15 thriller proved the race could stand on its own two feet without names like Lowndes involved. Nissan brought three unknowns to the Mountain who each headed home heroes, while Phoenix Racing stacked the deck with the impressive Laurens Vanthoor / Marco Mapelli / Markus Winkelhock R8 a notable standout and possibly the most impressive on paper in the whole field.

If anything, 2015 showed off more of the international talent than ever before and set the stage for the future of the race being a classic melting-pot of the best of the best from both here and abroad going head to head. 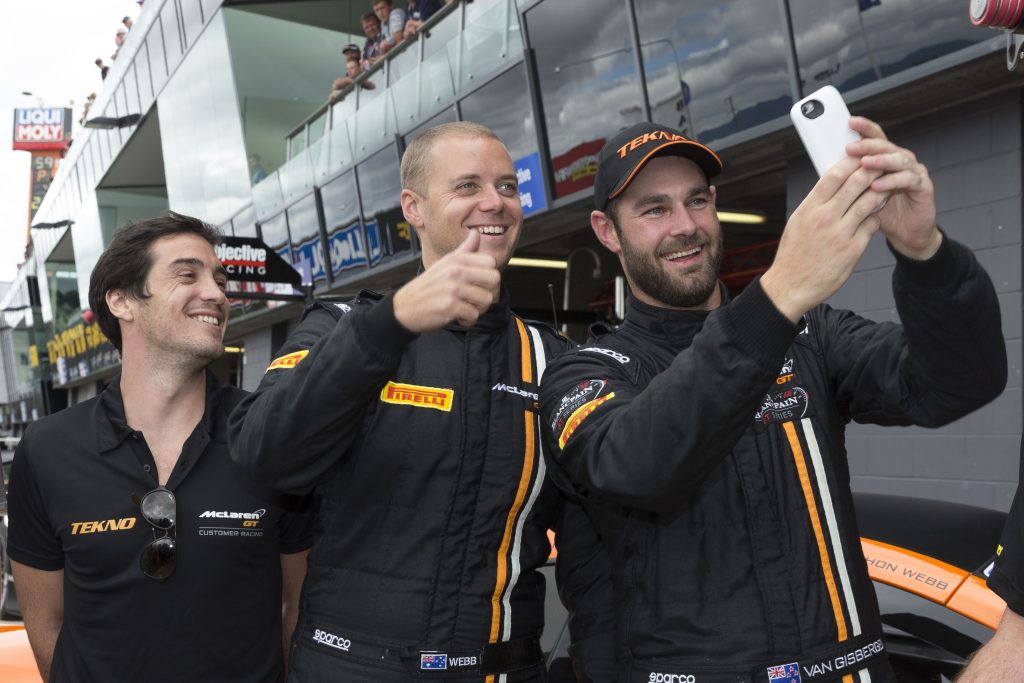 WHILE it’s always easy to default to the winning combination, there’s no doubt McLaren meant business when they fronted, via Tekno Autosport, for the 2016 race.

With the 650S reportedly a challenge to drive on the limit, they needed both raw speed and Bathurst experience in order to succeed and in SVG, Webb and Parente they got all three. Alvaro, in particular, was mighty throughout given he’d never been to the Mountain, while SVG was blindingly fast as ever – establishing lap records that year yet to be beaten in qualifying or the race.

A great combination that deservedly delivered a Bathurst win to McLaren. 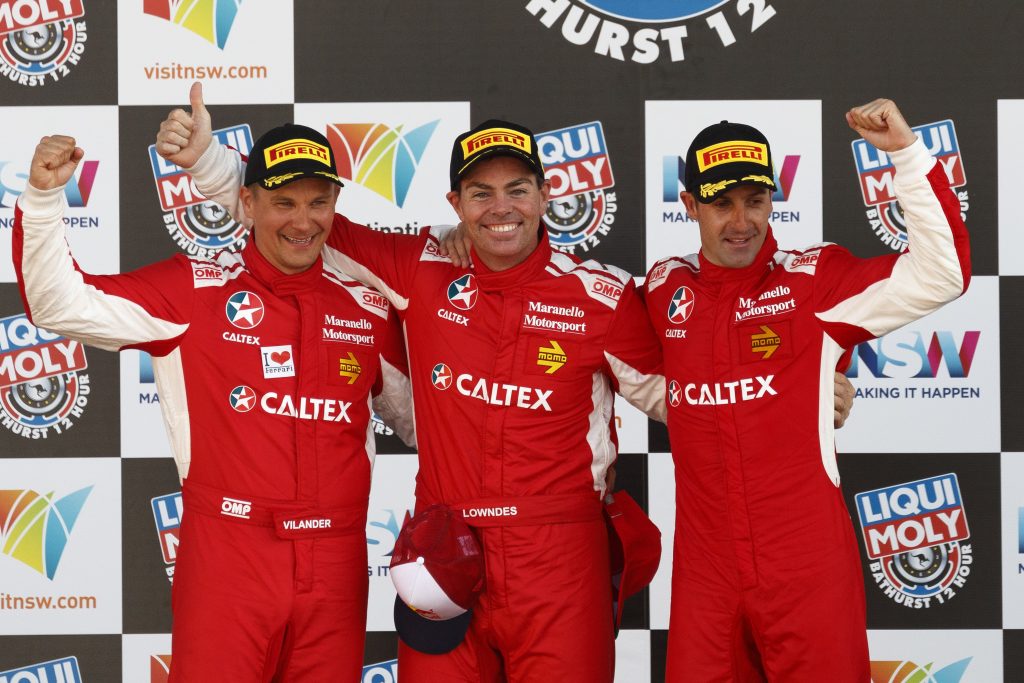 THIS has to rank as one of the best combinations ever assembled at Bathurst, surely.

Lowndes and Whincup’s track record was already well established, though Whincup had little time in GT cars prior to the 2017 race. Vilander, however, had plenty of miles at Bathurst and plenty in a Ferrari GT car so came in match fit.

And what a performance it was: Vilander’s middle race stint remains one of the very the best ever seen on the Mountain in any race – he smashed the field into oblivion. Lowndes was.. well, Craig Lowndes and Whincup delivered at the end when he had to fight his way past the Mercedes-AMG for the lead. This combination delivered everything the 12-Hour should; the best of Australia joining with the best of the world to make something realty special.

FROM a PR standpoint, very few team announcements created as much hype as this one when it was announced. The Grand Prix racer Glock joined by three former winners of the Great Race; including old rivals Skaife and Ingall driving together. Ultimately didn’t deliver the results and were out early.. but created plenty of impact along the way.

BY 2018 ‘BAMTHOR’, the unique partnership between Laurens Vanthoor and Kiwi Earl Bamber was already ‘a thing’, the pair having met at Macau in 2016. But 2018 bought them together at the Mountain in a works-supported Porsche with fellow factory pilot Kevin Estre. Going into the race as one of the favorites, they were in the mix all weekend and, depending on whom you talk to, were either the first or second car in the running order set to make it home on fuel before the Red Flag neutralized things half an hour early.

IT IS impossible to ignore a combination that brought together more than 250 Supercars Championship victories, more than 10 Supercars titles and three drivers who had all to that point won the 12-Hour as well – ensuring they were just as credentialed in GT racing as they were in the home-grown product.

The fact the Bathurst 1000 is only a two-driver race means it was impossible to pair Triple Eight’s terrific trio together in the October classic – so the Queensland-based team secured a Mercedes-AMG and did it in the February one, instead.

THE Schnitzer combination was hugely tasty; Mostert had proven his speed with pole position on the Mountain already, while Farfus was super quick and Tomczyk was a cool addition bringing his pair of DTM titles to the table.

Fifth proved to be BMW’s best 12-Hour result to date, but this combination is arguably one of the coolest and most diverse yet seen on the Mountain.