The Melbourne-based team has confirmed their entry of a Porsche 911 GT3R for the January 30-February 2 race next year, to be driven by Stephen Grove, his son Brenton Grove and British Sports Car ace Ben Barker.

The trio combined to give the Grove team their fourth class B victory in this year’s race while racing a Porsche 911 GT3 Cup Car.

The Grove’s maiden outright 12-Hour attack will be entered in the Pro-Am category within the broader GT3 class and will be a unique collaboration between German squad Herberth Racing, Grove Racing’s local crew and experienced local engineers.

“We have a technical partnership with Herberth who bring their experience within the Porsche GT3R program,” Brenton Grove explained.

“It will be a joint partnership with them, running under the Grove Racing banner and with the support of some local talent as well. 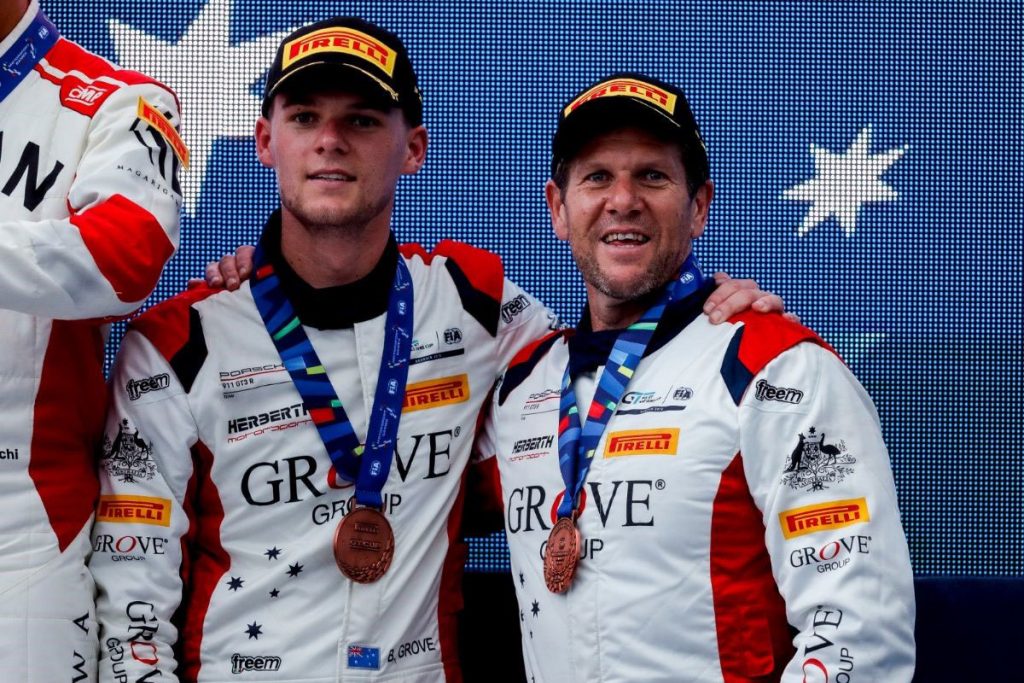 “Herberth’s head engineer will come over as crew chief and work with alongside their regular German mechanics and our local engineers, John Russell and Jarrod Bowles.”

Russell and Bowles headed up Grove’s Class B victory earlier this year, as well as engineering Brenton during his program with Triple Eight Race Engineering in the 2019 Super 2 Series. They have both recently returned to Australia having headed up the Jaguar Racing Formula E program for Williams Advanced Engineering in the UK.

“Those guys are hugely experienced both with the team and long-distance races at Mount Panorama. Having completed a full program with them this year we know each other extremely well and definitely talk the same language,” Grove said.

“Ben (Barker) is always strong at Bathurst and I strongly believe he should be able to run with the factory drivers at the event. We’re getting great support from Porsche, so hopefully we can be consistent and do our jobs to bring home a strong result.

“It’s hugely exciting for the team to make the step up from running for a class win to be competing with factory teams and all the brands that want to win at Bathurst. It’s one of the most exciting things we’ve done as a team and we’re all really looking forward to it.”

The 911 GT3R to be used is the same that both Groves utilised to score a medal in the recent FIA Motorsport Games in Italy.

The car will sport the same red and white livery as utilised in the international event, with the addition of several local sponsors to be announced prior to the race.

Adding to the combined international and domestic experience of the crew in the garage, the three drivers will enter the 2020 race battle-hardened given each had busy 2019 seasons racing across the globe following their 12-Hour class win in February.

Brenton is fresh from finishing 7th in his second season in the Dunlop Super2 series, alongside factory Holden squad Triple Eight Race Engineering, claiming a best finish of 2nd at Townsville.

Stephen embarked on his maiden Porsche Supercup season as part of a three-car ‘Team Australia’ attack, regularly finishing on the podium and bringing home 3rd within the Pro-Am classification.

Barker is a regular fixture in the FIA World Endurance Championship, driving a Gulf Racing Porsche 911 GT3RSR in the LMGTE-AM class.
Grove Racing are statistically the most successful team in the history of Australia’s International Enduro, having won Class B on four occasions since their debut in 2013.

The team has added a further pair of runner-up finishes and has been first or second in six of their seven 12-Hour starts.