Teenager Bayley Hall will be the youngest driver on the grid at the Liqui-Moly Bathurst 12 Hour, making his debut in the invitational class aboard a MARC II entry.

Hall will be on double duties at Mount Panorama, steering both a MARC II V8 Mustang in the 12 Hour, as well as a 5.0 Litre V8 Coyote MARC I Ford Focus in the Sports Sedan Series.

The 16-year-old young gun will co-drive for GJ Motorsport with teammates Warren Luff, Geoff Taunton and Brad Schumacher in the gruelling enduro.

Competing as the youngest driver in both classes – 16 is the minimum age for a driver to race at Bathurst – Hall has been preparing for the task by training at high intensity in the heat, in the lead-up to the January 31 to February 2 event.

His first laps in the MARC II Mustang came in November at the Challenge Bathurst event, and he will get behind the wheel again on Thursday at Queensland Raceway.

“I never would’ve thought I’d ever get to this stage and to be racing GT Championship against the biggest names you’ve ever heard of, it’s going to be unbelievable,” Hall told Supercars.com.

“To have [Warren] Luff on my side, it’s going to be great, Geoff [Taunton] taught me through my MARC car days.

“With the crew behind me, it’s all up to them, so however they perform is going to be great for all of us to work together and hopefully it goes our way, obviously it’s a long race. 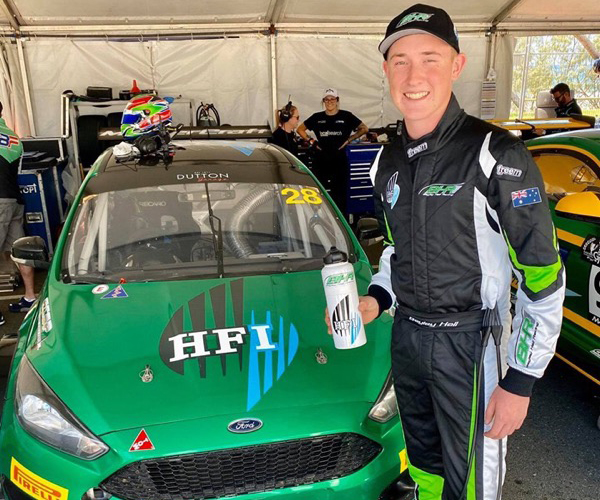 “To be around that sort of crew and in pitlane of the Bathurst 12 Hour with your name up on that board is going to be pretty unbelievable.

“I’ll be the youngest competitor in combined Sports Sedans and the 12 Hour, it’s definitely going to be a feat to hang onto and definitely a bit of history to be made.

“It’ll be great for me to try and prove myself and show them the age I am doesn’t restrict me in any way.”

Later in the year, Hall will compete in the GT1 Australia category, and will contest the Bathurst 6 Hour aboard a Mazda Production Car in April.

Despite being about to start grade 11 at school, Hall says he thrives on being thrown in the deep end and competing against those with more experience.

“When you’re on the track and right up someone’s clacker, you’ve got to make sure you’re safe with them, but make sure you put the body on the line and throw the car into the corners.

“Everyone has similar talents, but when you get to the pointy end, everyone is throwing it in as hard as you are, so you’ve got to keep on the pace and keep alert.”

Asked if he feels ready ahead for the 12 Hour, Hall responded: ‘I’m very confident at the moment, those cars are unbelievable to drive with the aerodynamics.

“It’s actually better to keep your foot planted than to try and lift off [the throttle]. It’s really convincing and makes me confident when I’m in the car, especially across the top and through McPhillamy, it’s a really great experience.

“I had a few laps, but even just to be able to not brake at McPhillamy and keep into it, it’s just unbelievable.

“I’ve got a lot of time left in it and we’ll really fine tune my driving style this Thursday… if I can get the most out of it, it’ll be great.”